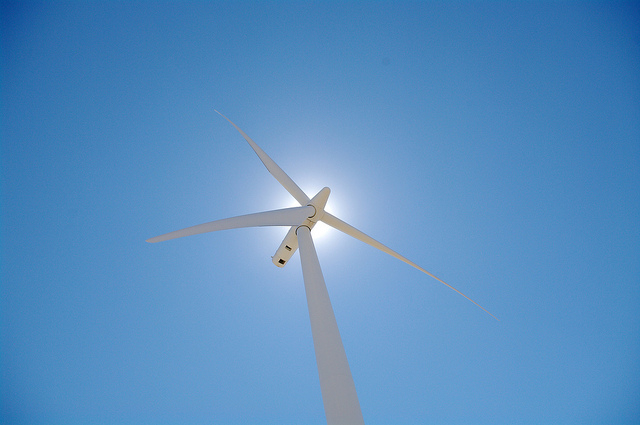 Renewable energy from wind turbines and solar could be the gold mines of the future. Photo: Iamoix

The immediate outlook might not look so bright. Floods and a heat wave have swept Britain this year. Globally the average temperature has risen by nearly one centigrade over the last hundred years. Sea levels are rising and ice caps are melting away and more people than ever suffers from extreme weather. According to theWorld Meteorological Organization, climate change related disasters have taken over 1.94 million lives.

So can there possibly be some good news out there? I will try to give you some.
Renewable energy is on the rise. In many countries across the globe investment in renewable energy is rising. Spending on solar and wind power are increasing their shares of the market. The cost of solar energy is now less or equal to the cost of energy produced by from other sources in at least 79 countries. By 2020 more than 80 per cent of the world’s population could live in areas where solar will be competitive with energy from other sources.

It’s accelerating. Improved batteries and grids are altering the way we think of renewable energy. Electric cars are getting better and more competitive with their fossil fuelled cousins. You don’t need to drive an anonymous Nissan Leaf, when you can drive a pure-blooded Tesla S sports car. The number of energy consumers who are also producers, are increasing too. Investing in renewables has become very lucrative too. Shareholders in companies on Bloomberg’s solar energy index last summer can now pick up 33 per cent profits.
Previous climate summits have been ridden by conflict’s and lack off resolve. When the parties meet again in Paris 2015, hope is regaining some ground because president Obama has shown to take some leadership on important issues. This spring he imposed new regulations on the coal industry to reduce their emissions. The US and China, the two countries producing the most carbon emissions in the world, has agreed a series of minor climate deals between them, raising hope that new agreements can be reached globally.

Saving the world could be surprisingly cheap, writes the New Scientist magazine. It claims the global spend on green energy must be increased by $1 trillion a year, but a lot of it could be made using the subsidies currently given out to fossil duels. Such spending currently stands at $200 million a year. Overall, global investment in energy is already over $1 trillion.
Cutting subsidies to fossil fuels while supporting more accessible and renewable energy combined with rapid development of technology could see some serious ground being claimed by the green cause. There are definitely reasons to be optimistic, now politicians’ musts step up their game.

Since the bombing of government buildings and massacre at Utøya in 2011, self censorship has been the guildine o public debate. There has been no room for anger, no root and branch inquiry into the dark underworld of ideological racism by society. Can the lid final be lifted?

On this day three years ago the vision of Norway as a peaceful and inclusive paradise was shattered forever. The political aspects of Anders Behring Breivik’s attacks has been played down, leaving the police and emergency services in the spotlight of public scrutiny.

The secret police (PST) still insists extreme islamism is the bigger threat against us, despite the growing list of right-wing extremist attacks and the islamists current lack of such history.

Raymond Johansen, party secretary of the Norwegian Labour party recently broke cover, saying his party have gone to far in toning down Breivik’s politics. His facism, his rascism, his hatred of Social-Democrats, socialists and other people on the left he accused of intentionally letting Muslims into the country to break down “Norwegian culture”.

The Labour party played a decisive role in shaping the post-terror debate in Norway, but so did also the parties of the political right. Fremskritspartiet (Frp), now in coalition government with the conservatives, has been whitewashed by the other parties. Breivik was a member of the party’s youth wing before leaving because their immigration scepticism was not radical enough. The party’s anti-immigration and anti-muslim rhetoric has been airbrushed from history, as it would be “rude” to score political points on it.

A full confrontation and washing of dirty laundry in public will be painful and controversial, but it is absolutely necessary. On comment threads on news sites, forums and in social media, a strong current of racisms is still flowing, the same current from which Breivik emerged with his bombs and guns, on this day, three years ago.

The Liberal democrats were a routed army Monday morning. After losing 10 of their 11 MEPs and a chunk of local chancellors the previous week, the mood was gloomy. Despite being continuously battered since entering the coalition pact with the Tories, the party has remained remarkably united always deployed an effective shield wall around their leadership.

The Euro election was the straw that broke some camels backs and knives were out when some members called for Cleggs resignation. Then The Guardian got hold a of a poll financed by a party member showing that the Lib Dems is heading for disaster in 2015 and may lose important seats like the one help by Nick Clegg.

The political reporters was on it as bloodhounds to reveal who was behind the poll. The whodunnit chase traced it all back to Lord Oakeshott, a Lib Dem peer with known grudges against Clegg. After being revealed he resigned his party membership and took a leave of absence from the House.

Th question many has been asking is if the Lib Dems would be better off with a new leader in the year leading to the general election in 2015. What we have of published or leaked polling shows that a change of leadership would not do much to change their dire situation.

The party members should instead prepare their local campaigns for reselection in the seats they hold. Extremely well targeted and focused campaigns have resulted in many strong local party branches with several councillors to its name able to challenge the two established parties. With a colossal effort and a bit of luck they will hold on to enough seats in 2015 to be potential king makers again. If Ukip succeeds in splitting the vote for both the Conservatives and Labour a hung parliament is likely and the Lib Dems might find themselves in a new coalition.

Spinners and losers had a ball this week with Osborne’s budget. Gold and glory was promised to the old folks, and the rest could lavish in reduced tax on bingo and a 1p cut in beer duty. So for every hundred pint we buy, we save a quid. Thanks George that really changed my life!

The new pension reform is supposed to grant bucketloads of freedom to the walker-brigade. Apparently old proles will cruise around down-town in their new Lamborghinis, picking up blonde chiquitas gold digging for their pension pots.

George Osborne is a full blooded radical right-winger with wet dreams of a marginal state outsourcing services to international corporations, and he don’t hide it. Given permission by the voters in 2015, he will push for a shrinking of the public sector to a size not seen since the post-war era.

The old system needed reform but not in this direction. The reform will affect millions who have saved for a stable future. Now they are expected to carry the risk themselves, not all of us together as a society.

Sadly there is no organised opposition to the new reforms in the Commons, as Labour insists on it’s conformism and letting the coalition dictate the rules. 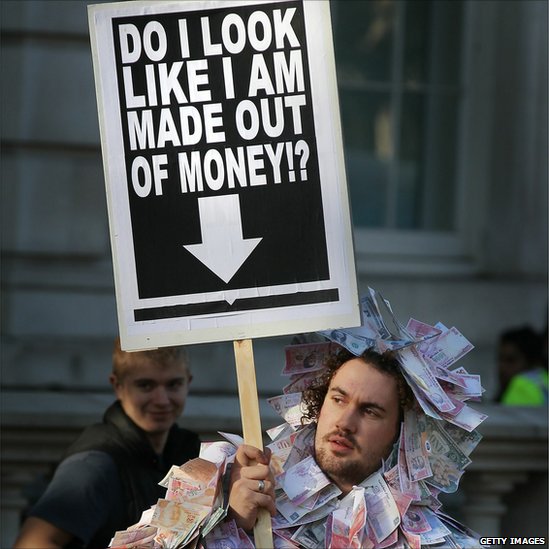 Students protested against more tuiton fees, but was defeated. Turns out Government had it all wrong.

The coalition’s decision to hike the tuition fees ceiling from £3,000 to £9,000 a year should save money for the state but might result in heavy losses.

As the number of graduates who fail to pay back student loans increases, the Treasure fears all economic gains from the fees hike could be lost. Experts have calculated that if the resource accounting and budgeting(RAB) rate of 48.6% is reached and breached, the government will lose money compared to keeping the old fees limit.

When the government introduced the new regime in 2010 they estimated that 28% of student loans would never be paid back, but this figure is now approaching 45%.

Raising the tuition fees was already damaging to students, now it is for everyone else too. Students leave university after 3 years with a Bachelor degree and £27,000 in debt due to tuition fees. What a great start to your career.

Repayments don’t start before graduates earn over £21,000 a year, which the Government thought most of them would do within a few years. It does not look like it will go that way any time soon. The ideologies at Conservative HQ and their Lib Dem minions have got their maths wrong. This system is stupid and unsustainable.

The Russian parliament has approved the use of military force and troops has been deployed in Crimea, is the peninsula already occupied?

END_OF_DOCUMENT_TOKEN_TO_BE_REPLACED

Education Secretary Michael Gove has recently been the man of the front pages and column inches. Gove wants to revert educational method and bring back some kind of classical system with more “chalk and talk” and stricter discipline.

Gove is a former journalist and very good at making headlines. His recent ventures has as usual been controversial and angered many like teacher unions and modern pedagogues.

END_OF_DOCUMENT_TOKEN_TO_BE_REPLACED

The big energy companies are hiking their prices, would we be better off without them? Photo: Telegraph.co.uk

Britain’s energy supply is far to important to be left in the hands of private companies putting profit before people.

END_OF_DOCUMENT_TOKEN_TO_BE_REPLACED

Festung Europa must open its gates and end this inhumane policy on immigration.

Each year tens of thousands of people risk their lives to enter Europe by sea from Africa. They are on the move for a myriad of causes. Poverty, war and natural disasters are some of the main push effects making people pack up and leave. Sadly the European nation’s attitude towards these immigrants and refugees has not been good. Despite evidence of how many actually die trying to cross the Mediterranean Sea, action is nowhere to be seen.

END_OF_DOCUMENT_TOKEN_TO_BE_REPLACED

Daily Mail editor Paul Dacre finally steps up to defend his paper in public while new poll show how he is out of touch with his own readers.

The Mail spread featuring Ed Miliband’s defence of his father, reprint of the Mail article in question and an editorial.